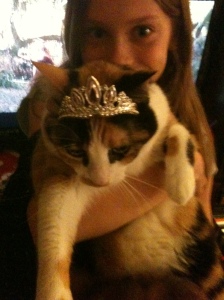 I would not consider myself a “cat person” and yet I have two cats, my family is currently Jonesing for a third.  I’m not sure how this happened.  Okay, I do remember.  When I married my beautiful wife, Jennifer, a cat came with the deal.  I happily accepted.  What I didn’t realize at the time is that “you can’t just have one cat”.  I guess its like Lays potato chips, the urge to get a second cat is so strong…there’s no fighting it.  Of course I’m not talking about my urge to get another cat, I’m talking about my family’s urge.  Then we got a second cat.  At least I got to name him.  The first one’s name was Maychen, which I think is a version of the German equivalent for “Little Girl”.  Since we already had a cat with a German Theologian’s name (Gresham Machen), I was given the honor to name the next cat (part of the deal).  So I went with Dietrich, in honor of the great Dietrich Bonhoeffer.  I’m sure Bonhoeffer is throwing a party in heaven right now due to this great homage.  His place in history as someone with enough intestinal fortitude to stand up against Hitler is nothing in comparison to being named after an alley cat.  Too far?  I’ll continue.

Then something terrible happened, Maychen got very sick and passed into the feline great beyond.  Every parent knows that this place exists because that’s what we tell our children and of course we would never lie to them.  When that happened, now Dietrich was alone.  I’m sure you can fill in the blanks, you seem like a smart person.  So then we went to the kitty shelter, where the cream of the crop dwells.  The land of forgotten kitties.  Cats who have misbehaved so badly, now they are in cat juvy.  We then decided to find the cat that had the most energy out of any cat that was there.  The cat that was zigging and zagging and could go from one end of the building to the other without being spotted (save the calico blur).  We brought her home, after prying her from the curtains, and named her Chloe.  I think Chloe is greek for “I want to kill you”.  Our reasoning at the time was “We need a cat that can match the energy of our kids”.  How could that have backfired?  Again, you seem like a smart person.

Now we are pushing for a third.  I’m not sure if the reasoning now is “Let’s prepare Chloe for when our other cat dies of natural causes…after all, he weighs seventy pounds (not really…just seems like it).” or what.  But here I am, a dog person in a family of cat people.  I’ve told Jenn many times, “When I die, you will become the crazy cat lady.” She giggles in agreement.  If you have any recommendations for how a dog person can actually get a dog in the mix without going insane I would greatly appreciate it.