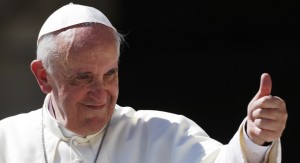 Man has long since had a fascination with religion and spirituality.  For some it is a passing interest.  An oddity of sorts.  The same interest that you have when you go to the zoo and find an animal that you’ve never heard of or seen before.  You want to know where it lives, what its origins are and how it interacts with its environment.  If you are really motivated, you’ll read about it and study it.

For others it is genuine interest and a compelling voice deep within that pushes them to look for something bigger than themselves.  It is a longing in their soul and a missing piece of a puzzle.  There is an incessant drive inside of them that won’t quit until that thirst has been quenched.

I think we witnessed both sides of the coin that I just mentioned when the Pope came to the White House.  I won’t take any amount of time to point fingers and figure out which people were on the different sides of that coin but I will say that I saw both.  There were some that were struck with awe by the presence of someone who has dedicated his life to being like Jesus and telling others about him and were inspired by that.  Then there were others that were fascinated by the oddity of someone like Pope Francis and couldn’t stop staring.

This may come as a surprise but I’m not nor have I ever been Catholic.  I’ve had some really great friends that are or have been Catholic in the past and I have a great respect for the rich history and reverence they have for their beliefs.  Being a non denominational pastor, the Pope doesn’t hold the same significance for me as he does for my friends.  That’s okay.  I do think that his presence in the midst of powerful men and women in Washington shows us something about ourselves.

During his visit, I thought that it was really interesting to hear the chatter on talk radio and in the news.  The liberals thought the Pope was endorsing their platform of social justice and the conservatives thought they were getting pats on the back for their pro life stance.  Pope Francis is a really interesting guy.  I’m pretty sure he walked the line intentionally.  He had some things to say that would hit either party right between the eyes but he did it in a way that was not offensive or aimed at alienating people.  He spoke truth in love in a pretty tough environment.

I think we can learn from the Pope’s visit.  Please spare me your view on the idea of a Pope and your theology that backs that up.  I’ve heard both sides and I’m not writing this to discuss that issue.  Here’s what I’d like us to focus on:  we can speak to people about issues that we are passionate about without tearing them apart.  As a matter of fact, in telling them about those issues we might even be loving them.  No one is going to change their point of view if you are attacking them, they will only get defensive.  As followers of Jesus, we need to be able to talk about Jesus in a way that makes people think, not fire back at us with their own agenda.  Like a very wise man once said, “They don’t care what you know, until they know that you care.” If we could adopt that attitude, we might be more like Jesus in the process.

“but speaking the truth in love, we are to grow up in all aspects into Him who is the head, even Christ,” Ephesians 4:15