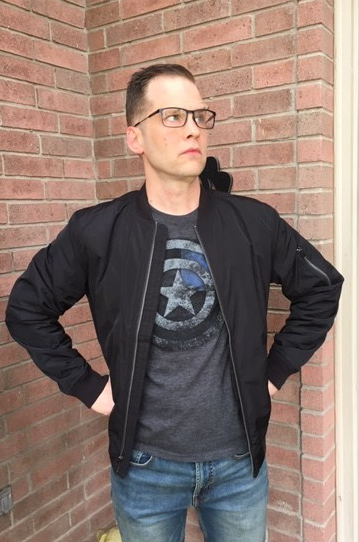 Not too long ago, I made a decision.  That decision was to push further into an interest of mine for the sake of opening conversation and potentially making some connections that I wouldn’t normally make.  You see, I’m a pastor.  I hope that wasn’t a huge shock to you.  Because of that, I normally hang out with church people.  I think you are still tracking with me.  Just so that you understand where I’m coming from, I like hanging out with church people.  We have common interests…namely Jesus…and because of my position, it is relatively easy to talk about that.

Here’s the problem.  I like hanging out with all people.  Okay, there may be some people that after I hang out with them I might be tempted to cross them off the list but what I am trying to say is that I love hanging out with a variety of people.  I love people from Texas, California, Arkansas and Florida.  Notice I didn’t say Oklahoma.  I’m kidding!!!  I love hanging out with people from Oklahoma!  It is a blast to talk to people from different countries, backgrounds, religions and yes, varying political persuasions.  I learn so much from being around people that are type “A”, those that are intuitive, individuals that are highly relational, dreamers, futurists, artists and small business owners.  I feel like every time I am around people that are not like me, I learn something about them that makes me more compassionate and understanding.

Unfortunately, all too often, I have had the experience of telling people what I do for a living and quickly being shut off from conversation.  It is either that, or they begin to share with me their church resume.  “I used to go to church but I just got busy.” or “my father’s cousin’s aunt was once a pastor at an Episcalutheran Church in Oklahoma.” Sorry, I just threw Oklahoma in there again.  I’m not sure why.

Either way, it seems to shut people down or get them hyper focused on what I do for a living.  I can’t blame them.  Its what we all do.  When we get into a conversation with people, we want to keep the conversation going so we talk about their jobs.  The only problem is, most people don’t want to talk about what I do for a living.  They have either been burned by church, have no interest in it or worse, they have a strong aversion to anyone who would call themselves a Christian.

I could go into why that is, but most of us get that.  As a pastor, it makes what I do difficult.  As I stated previously, I love all kinds of people.  I enjoy connecting with people who aren’t just like me.  Because of that, it puts me in a very difficult place.

After many years of frustration and much prayer, I had an idea.  What if I could just engage people in a conversation about something that I am already interested in and begin relationships that way?  If I could share my passion for a common obsession, maybe I could begin to have access to people that don’t think and believe the same way I do.  Don’t get me wrong, I don’t want to use this interest to gain access, I want to share this interest so that I can interact with people that wouldn’t normally talk to me.

It reminds me of a scene from the life of Jesus.  As per usual Jesus and the twelve were on the go.  They were hoofing it from Judea to Galilee.   The shortest route to get to Galilee is through Samaria, but no one in their right mind went through Samaria.  All of the respectable Jewish travelers avoided contact with Samaritans like the plague.

A Samaritan was considered impure or unclean because of their heritage.  They were half Assyrian and half Jewish and because of that, they were excluded from temple worship and were a harsh reminder of Israel’s captivity.

Of course, Jesus wasn’t a big fan of following man made rules.  In typical fashion, He makes the decision to break through all of the barriers that have been set up by others to reach a people that no one is reaching.  In short, He wants to connect with a group of people that are vastly different from Him; people that “good religious people” would never go near.

How does He do this?  He sends the disciples off for supplies and goes to get a drink of water.  Maybe he didn’t want His disciples ruining a conversation before it even got started.  Who knows.

At the local watering hole, He meets a Samaritan woman who has lived a hard life.  She has been through multiple marriages, is currently living with a guy and has been discriminated against most of her life because of her nationality.  Jesus crosses all of the barriers that no one would cross just to share a cup of water and to have a conversation.  He would be judged for this and despised for it.  During the course of His ministry, He would be accused of being a Samaritan because of His love for this people.  All for a drink of water.

What’s my point?  Jesus was motivated, out of love, to talk to this woman so that she would be inspired to follow Him.  To have faith in Him.  Her life would be forever changed after this event.  This only happened because they had something in common…thirst.  Jesus found common ground with her even though they were vastly different.  Because of His love and compassion for her, he won her heart.  He could even have tough conversations with her about her past and her response would be… “Sir, …you must be a prophet.” John 4:19

There is a lot of power in finding common ground with someone.  I know, at times it feels trivial to have a conversation about something that you enjoy doing.  When you strike up a conversation about golf, it feels surface level.  The times that you’ve discussed a movie or a book that you really enjoyed, it seems like you need to be talking about something of greater significance.   Maybe we should focus less on the topic and more on what is happening.  You are connecting with someone in a relationship over something you both love.  In the times that we live in, that is not insignificant.  We are used to engaging in conversation with someone we have opposing views with.  That has become the norm.  We enjoy getting into a fight with a person we barely know over something we care about, or at least are mildly interested in, but connecting over something we enjoy…that’s trivial

Jesus was willing to talk to someone about water so that He might talk to them about heaven.  From H2O to eternity.  From a watering hole to the River of Life. Those are some mad skills!  I don’t know if you’ve ever tried to shift a conversation from things that people normally talk about to spirituality, but it is never that seamless.  Jesus earned the ability to do that by caring and taking risks that no one else would take.  Of course being the Son of God didn’t hurt things either!

Back to my decision.  The hobby that I was talking to you about earlier is Geek culture.  I am hopelessly fascinated with Marvel, DC, Science Fiction, Lord of the Rings and all things that most nerds “geek out” over.  I have had conversations with a variety of people over those topics that would never talk to me about God.  It is amazing how easy it is for me to discuss these things and then show them compassion in other areas of their life as Jesus would.  I am confident that those discussions can lead to something more.  Perhaps it can go from comics to community, from DC to JC, from the force to the Spirit.   Okay, that was a little cheesy but you get where I’m going with that.

I want to be able to start conversations and make connections with people without an agenda.  At the same time, my hope is that in those connections and friendships that I make, people can see Christ in me “the hope of glory” (Colossians 1:27).  I want to live as Jesus lived, by starting a conversation over common language and see where it leads.

Something to think about: what hobbies, past times, interests or gifts do you have that you can invest time and effort into that would lead to connections with people that you wouldn’t normally connect with?  A follow up thought might be: how can you live a life of love, as Christ did, so that people question you and show a genuine interest in your personal devotion?