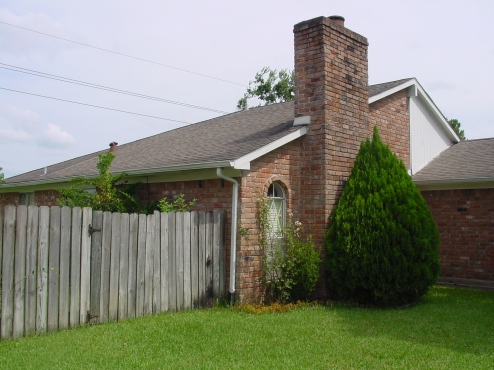 When I got my first full time ministry gig it was in Houston.  We found a pretty quaint (code for small) and cozy (also code for small) home right off of highway 6 in West Houston.  I’ve told quite a few people that we didn’t really live in the hood, but we weren’t far removed from it.  I can still remember looking out of our back window at night, which faced the back of a retail store, and seeing the rats run across the top of the fence.  Pretty swank right?  Okay I’m overstating it a bit.  We weren’t really in the hood.  It was a nice home and we were safe for the most part.  Let me emphasize, “for the most part”.

One day I came home from work and heard a knock at the door.  It was my neighbor from across the street, whom I didn’t know.  He was a pretty rough looking character with a handlebar mustache, truckers cap, flannel shirt and unshaven face.  And yes, a thick Texas accent.  He proceeded to tell me that he had seen some guys snooping around my house that day.  “Huh” was my response.  I’ve got a way with words.   He then told me that they were looking in my windows and went into my backyard.  Again, “Huh” was the only thing that came out of my mouth.  My heart was beating a little bit faster as he continued his story.  Apparently then my neighbor, who at this point reveals that he is an ex narcotics officer, ran inside of his house and grabbed a hand gun.  I do remember distinctly thinking “God bless Texas” even though I probably didn’t say it out loud.  He notified the police and then booked it out of his front door around my house and into my backyard tackling the suspect.  The police show up and arrested both suspects, one of whom they picked up down the street.  Both had criminal records in New Orleans (this was right after Katrina).

My response?  “Uh…thanks?!”  I told you I had a way with words.  What CAN you say?  This guy was amazing right?  He put himself into harms way because his neighbor’s house was in jeopardy.  For all he knew, my wife was inside of the house (which thankfully, she wasn’t at the time).  This guy had an “other’s” mindset.  He thought more of our safety, than he did his own.  I’m not sure I would have the courage to pull something like that off, would you?  Sure, he had training to back it up but still.  I was pondering this verse in Philippians that talks about having the same attitude of Christ.  It stated that even though He was God, He didn’t act entitled to the things God would be deserving of.  He was a servant.  In God’s economy, that is the highest rank you can have: a servant.  I’m trying to wrap my mind around how I can have that mindset.  I want to think more of others than I do myself, look after others well being even when it doesn’t serve me or further my advancement.

To do that, it has to start with looking at the way Jesus lived and following His lead.

Have this attitude in yourselves which was also in Christ Jesus, who, although He existed in the form of God, did not regard equality with God a thing to be grasped, but emptied Himself, taking the form of a bond-servant, and being made in the likeness of men. (Philippians 2:5-7)